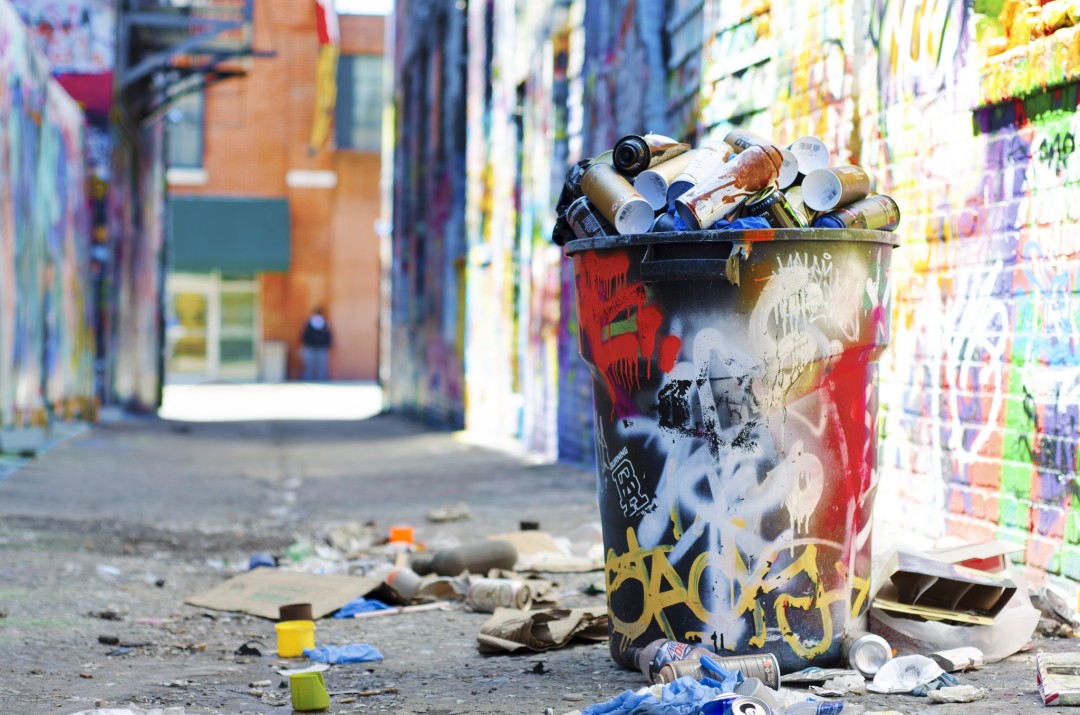 On a building wall in Tokyo’s Shibuya district is a mural, spanning more than three floors. It was created for the weeklong art event POW! WOW! Japan, and was painted by eight different street artists including Japan based street artist, designer and illustrator Jay Shogo.

Jay Shogo is making his mark in the street art world, for his bold pieces and he is renowned for his exclusive use of the Sharpie marker. The marker’s practical focus: “it’s sold everywhere, readily available, and all you need to do is take the cap off” is one of the reasons why this is a material of choice for Shogo. “I used a marker “Mckee” in Japan, but now use Sharpie”, said Shogo, but now also uses a range of other materials.

There is a certain entrepreneurial spirit that Shogo embodies, perhaps like most creators, which has seen Shogo charter additional artistic territories, including apparel, of which he is certainly not a stranger to the world of fashion. Shogo once worked in a select shop in Tokyo as a shop manager, buyer, and merchandiser for 10 years until, in 2005, Shogo established his own company, the apparel brand HIGHLIGHT CAVALET which he designed on his own, and four years later founding eyewear label beik. But although he delves into these other areas of creation, for Shogo, they are all intertwined. “I do not think of fashion and street art separately. Both have similar creative processes. I incorporate each element into both. For example, I photograph fashion in the background of art, I paint art on fashion photos, and I use art for graphic design and pattern for textiles,” he said.

His creative ventures have seen him travel across the globe with this travels greatly influencing his work – his 2009 trip to the US saw the birth of his popular character Ya-Man, a little frog-looking creature for stamps. However, it’s important to go back a step, and discuss why it is that Shogo enjoys travelling. “I do not have a direct influence by Japan and heritage,” he said, “I was born and raised in Japan … I know the good and bad points of Japan. That’s why I thought I want to leave Japan,” he added.

And so what Shogo didn’t find in Japan he found in the areas he explored. “I receive a lot of stimulation from experience of the real life in various countries around the world such as coming in contact with different cultures, eating a local meal, feeling climate and nature, communicating with people, and learning about their way of thinking,” he said.

American culture has been an influential one for Shogo, explaining that as the two differ greatly culturally, (“the culture of the meal, culture of the play, and a various different language”) it was an opportunity for him to embrace that which he couldn’t find in Japanese culture, adopt it, and make it work for his art. “I am Japanese, so I make use of imagination that only being Japanese can, and I can create art which mixes Japanese and American influences,” he explained. “I felt the good points of Japan once again when I went outside of my home country.”

This multicultural medley is what makes Shogo’s work so unique and recognisable. Its essence is Japanese, but dig a little deeper, and these hints of diversity come through, like in his series of famous composers including Handel and Schumann, their portraits on a colourful harlequin-esque background, and colourful patches of paint dripping over their faces. Or his piece for Art Basel Miami 2014, panels painted with hearts, peace signs and colourful bubbles. Tradition meets modernity in his playful and witty pieces, which evoke words like, happiness, peace, love, and imagination. “These words are very important for my life. These thoughts made me what I am today, and it becomes the action and then work. Rather than wanting to spread a message to many people, these words are my life,” said Shogo.

His art is also his life, his enthusiasm is pervasive, and has seen him paint the lobby of a game company, as well as painting commissioned pieces from his fans and continuing to produce and design apparel for HIGHLIGHT CAVALET. Next year he will have his first solo exhibition in Japan and he also has a new project to be revealed soon.

“My work is play. My play is work.” I want more people see my art. I want to be Art = Jay Shogo. In all countries, I want to paint a mural and hold an exhibition,” Shogo said excitedly. “To be frank, I do not think about the future very much. But I want to keep what I am doing now.” With a creative talent that is as expansive and vivacious as Shogo’s – from painting towering murals, and lobbies, to designing eyewear and clothes –will more than likely let him equate to art. But whatever the mathematics may be, his work and its multicultural richness will surely leave a mark on the art world, with, of course, his beloved Sharpie.