From the age of four and throughout his youth, Professor Ghil’ad Zuckermann was considered a mathematical prodigy, but always felt that it did not have the soul, social interaction and emotional intelligence that languages have. “I might be wrong but I was certain,” said Professor Zuckermann from his Adelaide University office. He has always been interested in languages, both Language (with a capital L) and languages, and has always been ludic and playful with words. He used to write palindromic stories and bilingual homophonous poems, which are now widely found on the Internet.

“Children’s writer Russell Hoban described language as an ‘archaeological vehicle’, full of the remnants of dead and living pasts, lost and buried civilisations and technologies. The language we speak is a whole palimpsest of human effort and history,” quoted Professor Zuckermann by heart.

He shifted in his chair, gesticulating gently, and explained that palimpsest is a beautiful metaphor for language.Coming from Greek,it means ‘scraped again’, ‘re-scratched,’ referring to a text written on top of another text. “A language is multi-layered, it encodes the heritage and the culture of a people across history and pre- history,” he said. “I like not only palindromes but also palimpsests, let alone paraprosdokians,” added Professor Zuckermann.

I asked what paraprosdikians are, and he smiled. “That’s a good question,” Zuckermann said. “A paraprosdokian is a sentence whose last part consists of an unexpected catch, an anticlimax, ‘she got her looks from her father, he is a plastic surgeon,’ or ‘when I met her, I felt I had known her from a previous life. Two weeks later I understood why I had not called her for 1,750 years’.

Around this time he published an article, where he referred to Revived Hebrew as Israeli, acknowledging the limits of language reclamation. He then became an expert of language revival in general, and the reclamation of no-longer spoken languages in particular. Then after Oxford, he was Research Fellow at Churchill College, University of Cambridge, and after a Sabbatical at the National University of Singapore, he was then invited to deliver a public lecture at the University of Sydney, where he found himself quite taken with Australia. “It was my first time in Australia and I fell in love with Sydney on first sight. I went back to Singapore and then to Cambridge, knowing very well that I would eventually end up Down Under,” he said.

Professor Zuckermann ended up at Adelaide University (via a series of prestigious appointments including a position at the Research Centre of Linguistic Typology at the Institute of Advanced Studies at La Trobe University.) Today he holds his tenure as the Chair of Linguistics and Endangered Languages at The University of Adelaide where he has established a new trans-disciplinary field of enquiry called ‘revivalistics’, and to assist in the reclamation of a specific sleeping beauty language: Barngarla, a now extinct language that was spoken in the Eyre Peninsula in South Australia. These were his goals upon migrating to Australia.
“As a grateful migrant to Australia, [I thought] how can I contribute to Australian society?” He quickly detected two problems: the first he said, was bureaucracy, the second, he said was the Aboriginal trauma and Stolen Generations.

“I knew that I wouldn’t be able to reverse, or antidote, the professionalised technocratic mindset. So I decided to explore the Aboriginal issue. Had I been a psychologist, I would have volunteered to reduce smoking habits by Indigenous people. Had I been a dentist, I would have volunteered to fix Aboriginal people’s tooth problems. But I am a linguist. So I decided to apply lessons from the Hebrew revival to the reclamation and empowerment of Aboriginal languages and cultures,” said Professor Zuckermann.

And so began his journey to establish revivalistics, which studies the universal constraints on the one hand, and the culturally-specific peculiarities on the other hand, occurring in linguistic reclamation, revitalization and reinvigoration attempts across various sociological backgrounds, all over the globe, explained Zuckermann. “Revivalistics combines scientific studies of native language acquisition and foreign language learning, but it is important to realize that revivalistics is far more than Revival Linguistics. It studies language revival from various other angles from law, mental health, and politics, to technology, theatre, evolution and even architecture,” he said.

“Establishing revivalistics in Australia is turning Indigenous Australians into experts of language revival, who will be able to assist many others in linguistics,” said Zuckermann. Language revival will become increasingly relevant in Australia as with globalisation, homogenization and coca- colonisation there will be more and more groups all over the world added to the “forlorn club of the powerless lost-heritage peoples”. Australia, unfortunately, has seen a great deal of linguicide (language killing) since the early colonial period, he explained. “Out of 330 known Aboriginal languages, today only 13 (4%) are alive and kicking, that is spoken natively, as a mother tongue, by the community children,” he said. “Globally, there are around 7,000 languages spoken worldwide. But 96% of the world’s population speaks only 4% of the world’s languages. Linguistic diversity reflects many things beyond accidental historical splits. Languages are essential building blocks of community identity and authority.”

When we lose a language, we lose a number of important aspects also. Professor Zuckermann explained that we lose our cultural autonomy, intellectual sovereignty, spirituality, wellbeing and even mental health. “You lose your soul. Of course there is a trinity of language-land-people and it is often impossible to separate them. But, if you put a gun to my head, I would argue that the loss of language is much more severe than the loss of land,” Zuckermann added.

This is why his work to save the Barngarla language is vital. It all started when Professor Zuckermann contacted the Barngarla community and asked them if they would like to reclaim their sleeping beauty tongue. “Their response was that they had been waiting for me for 50 years,” he said. He has held dozens of workshops and Barngarla Language Advisory Committee (BLAC) meetings all over Eyre Peninsula. “I teach the language, we coin words, we discuss how to change the langscape of the Barngarla land,” he added.

And to what end? Language revival has an empowering effect on the community well being and mental health, explained Zuckermann, and participants develop a better appreciation and sense of connection with their cultural heritage. “A Barngarla participant at one of my Barngarla Aboriginal language reclamation workshops wrote to me unsolicitedly that she found learning the language ‘liberating’, that it gave her a ‘sense of identity’ and that ‘it’s almost like it gives you a purpose in life’. Another participant said: ‘our ancestors are happy’, which is a wonderful indication of empowerment.”

In fact, studies have also shown that bilingual children have better non-linguistic cognitive abilities compared with monolingual children and improved attention and auditory processing, he explained. Furthermore, being bilingual or multilingual can slow dementia by 4.5 years, which improves quality of life and ultimately reduces money spent on medical care. Other studies have also shown that decision-making biases are reduced when using a second language (for more see Keysar et al. 2012:661).

Language revival will become more and more relevant, so much so that universities will eventually realize that it was foolish for them to have closed down faculties of arts. It’s due to what Zuckermann calls the ‘talknological revolution’, which he explains blends talk with technology – think 21st century digital mass media resulting in Big Data.“Whilst the Industrial Revolution turned people from seeking food to seeking things, I believe that the current talknological Revolution will eventually turn people, the hoi polloi, the masses, from seeking things to ideas,” said Zuckermann, leaning to grab a whiteboard marker. He took the marker, and drew Abraham Maslow’s hierarchy of needs pyramid, which Maslow first established in his seminal article ‘A Theory of Human Motivation.’ Zuckermann then made two additions: Wi Fi and battery. 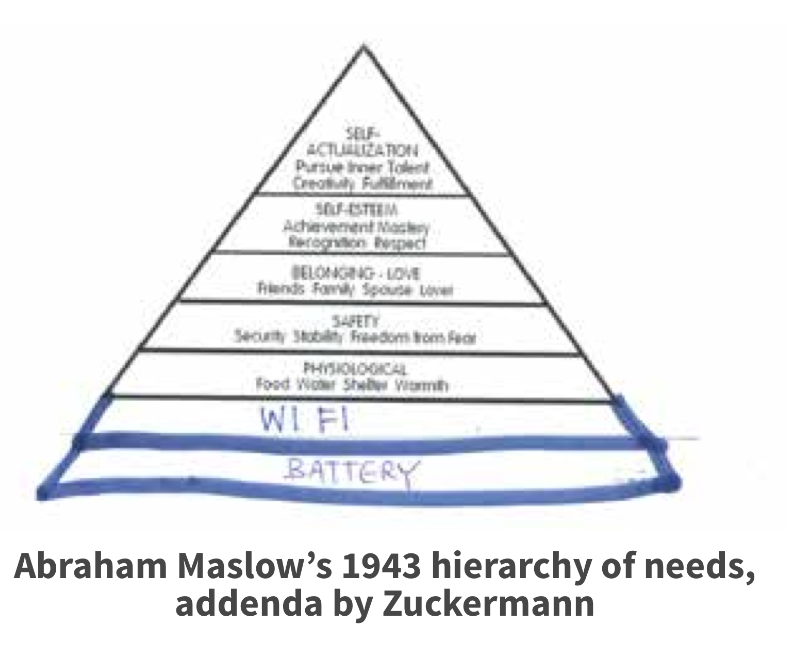 “In accordance with searching for ideas, resulting from the talknological revolution, more and more people in the future will go up Maslow’s ladder and be interested not just in big houses and speedy cars but also in heritage, culture, and language,” said Zuckermann.

Zuckermann’s relationship with linguistics has led him all over the globe, and has seen him interact with renowned individuals such as Stephen Fry, who Zuckermann describes as a “lovely perspicacious individual.” Fry interviewed Zuckermann on the Hebrew Revival. “I very much enjoyed being interviewed by him. He asked insightful and often understood my linguistic thoughts much more deeply than many academics in the field. We spent seven hours together in Rishon LeZion, Israel.”

As our interview came to a close, I felt very much that I had also interviewed a lovely perspicacious individual. Echoing the words of Russel Hoban, ‘the language we speak is a whole palimpsest of human effort and history,’ and for Zuckermann to revive the languages that are lost, we will see not only the revival of a lost language, but discover a history of great importance.

This article was originally published in the Graduate a Union of a The University of Melbourne Inc. November newsletter.